When finish materials last night, I also thought about it for a long time. Then I wrote a sentence: “Maybe only when the wealth reaches a certain level, can we comment on whether a certain product is really good-looking.” This “looking good” is pure in pretty appearance, not cost-effective, is not dragged down by the wallet. So today I picked Bvlgari brand and did not emphasize the price, just let us return to the origin of design.

I remember that many years ago someone showed me a Bvlgari woman’s watch, fulling of gemstones, and it was very expensive. I thought, “why don’t use these money to buy something with a high cost performance?” Later, the cruel reality made me understand that only “Poor” will think about the cost, which is limited by the disposable wealth. Therefore, I would like to look at these watches with a pure appreciation. Remember that when I entered Bulgari’s showroom, my first reaction was to raise my sleeves quickly and I couldn’t wait to try on them. I am afraid that moment represents many women’s instincts a feeling of. You will see big movements that Bulgari made in Basel. Last year brought Wu Yifan. This year is Shu Qi. 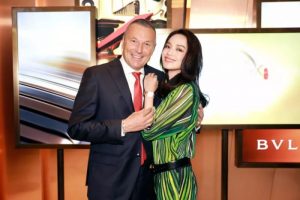 Especially when she was wearing the latest Lvcea Tubogas watch, I guessed that this must be the main watch this year. 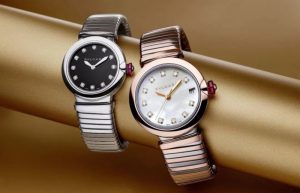 This is the first time that Bulgari’s classic Tubogas bracelet has been used in the LVCEA series.

I believe everyone is no stranger to this watch chain, which was previously used on the Serpenti series, coupled with the serpent’s shape, is very tune. 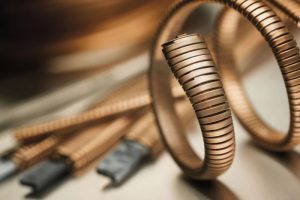 The Tubogas process is named after a bent metal gas pipe. This technology has been applied to jewelry production since the late 1940s. During the art deco period, large scale artifacts were often miniaturized and created. The Tubogas process was inspired by industry and became a well-known technique.

In the 1940s, Bulgari combined the dial with the Tubogas bracelet to launch the Serpenti watch. 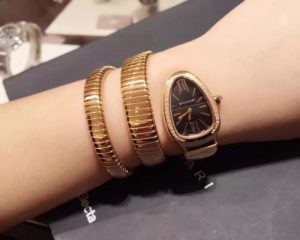 In the 1970s, this craft was used by Bvlgari in many design fields such as rings and necklaces, and Tubogas chains were used to match ancient coins and colored stones.

This year, the Lvcea Tubogas watch has a total of 5 models, 28 mm in diameter and 33 mm in diameter. There are, of course, bezel-encrusted and non-drilled versions. The movement also has quartz and mechanical points, depending on the individual needs of the girls. 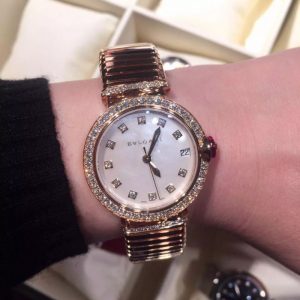 When we judge people or things, we always have a comprehensive evaluation of appearance and intrinsic. For people, we always think that “inner” is more valuable than “outside appearance”. Of course, that’s right. However, similar to watches, I just think that this era, at least at the level of mass consumption, or “value first”. So “interesting inspiration” refers to the internality of the watch, the grinding of the movement, and so on. Why do I encourage everyone to pursue purely good-looking on the basis of improving aesthetics, because this is a basic enjoyment. In fact, we don’t have to worry too much about “beyond the golden brilliance”, because these big brands want to live in the market and cherish their wings more than anyone else (to fool people in invisible places, sooner or later). Of course, if you are temporarily shy of the wallet, “cost-effective” is still an insurance path. Each person’s life stage is different, the pursuit is not the same, do not have to be consistent, and each needs to be like. Finally, welcome to chat about what you’ve experienced as “What do you think is good-looking, but it’s negated by others”, and you are ultimately forced to follow the consensus?

Bvlgari excels at creating classic styles, whether it be Bvlgari Bvlgari, Davis’ Dream or Lvcea, each of which is a…

Compared with the watches in previous years, this year’s Bvlgari adds the skeleton technology into the Lvcea series of watches for the first…

In 2014, Bvlgari ushered in the 130th anniversary celebration of the brand’s founding. To celebrate this special occasion, the…